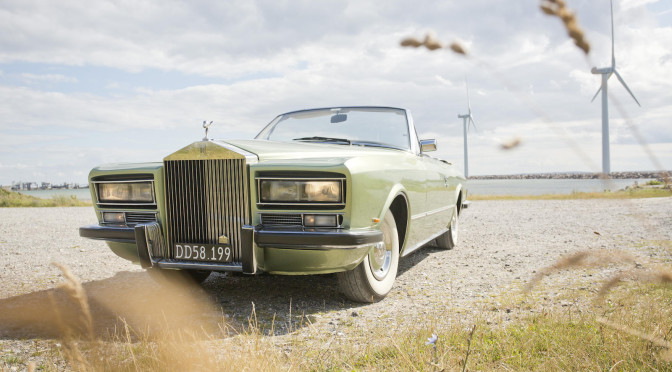 Rolls-Royce’s new limousine model, the long-wheelbase Phantom V, effectively replaced both the royalty/heads of state-only Phantom IV and the Silver Wraith. Built on a much modified and strengthened Silver Cloud II chassis enjoying the same 145 inch wheelbase as the IV, the new Phantom measured over 6 metres (19′ 6″) in length and enabled coachbuilders to combine the desirable qualities of spacious interior accommodation with generous boot space and graceful lines. Now built by the combined firm of H.J. Mulliner, Park Ward Ltd., the car lived on into the 1990s as the Phantom VI, its passing in 1992 marking the final demise of the separate-chassis Rolls-Royce.

374 Rolls-Royce Phantom VI were built. All but six received bodies by Mulliner Park Ward. Out of this number, 355 were limousines plus eleven landaulettes using the Mulliner body. Four chassis-cum-engine assemblies were supplied to the funeral trade. The only exception was two chassis that were bodied by Pietro Frua.

PRX4705 may quite simply well be the largest and most imposing two-door convertible existing in the world today – and most likely one of the largest two-door convertibles ever built. Although it has a four-door sibling that at some point was owned by the famous Blackhawk Collection in California, the car on offer today is a unique one-off in every respect. It was created by the world famous Maserati designer Pietro Frua in his crisp signature style to a special order received in 1971 from H.E. Consul Simon van Kempen of Switzerland and Monaco. It remains an automobile that will stop passers-by in their tracks wherever it is shown.

The chassis was dispatched to Switzerland on 24 November 1971 with a declared value of GBP 6,265 plus GBP 492 for various accessories – a massive amount at the time. It was delivered to the Garage de’l Athenee in Geneva that had the task of assisting Pietro Frua during the construction of the one-off body. Frua had worked for the Swiss coachbuilding company Ghia-Aigle, which may explain why he was chosen to design Consul van Kempen’s car. His initial rendering was numbered 869, but after some alterations to the wheel arches, the final design was labelled 870 and shows the car as built.

It took two full years to complete this stunning convertible, the process being endlessly delayed by the Italian-English language barrier between Frua and Rolls-Royce, while a British chassis measured in inches did not make life easier for the metric Italians. The fact that Consul van Kempen decided in the middle of everything that he wanted the classic Rolls-Royce radiator inclined at an angle, thereby fundamentally changing the front end design of the car, did not spur matters along either.

The seats were trimmed with specially selected leather of finest quality, the luggage compartment and floors received light leather-bordered carpets, the steering wheel received hand-stitched leather trim, and the horn button was engraved with the owner’s initials. Frua sprinkled the bodywork liberally with R-R logos above the taillights and on the side trim. Tool compartments were not in the trunk, but in neat receptacles on both sides of the engine under the bonnet, which is piano hinged and opens separately in the classic manner. As delays mounted, door locks and other mechanisms were sourced from Mercedes-Benz. In the end, Consul van Kempen threatened to cancel the whole thing.

The final Rolls-Royce inspection of the finished car, which was necessary in order to receive the warranty papers, took place in Italy on 5 September 1973. Although he did not take delivery until that time, Consul van Kempen was delighted with his giant convertible and kept it until 1997, using it extensively. It was subsequently acquired by Walter Steinemann, a second long-term owner, who retained PRX4705 until it was purchased by Henrik Frederiksen. The car remains in wonderful condition today with pale green metallic paint, complemented by a luxurious off-white leather interior. It is ready to provide its new owner with glamorous top-down motoring on the open road.

Very few Phantom VI chassis were sold to the trade. Chassis PRX4705 is one of these extremely rare examples, and therefore presents a remarkable opportunity for the dedicated Rolls-Royce collector. The combination of its absolutely stunning size and presence, coupled with Pietro Frua’s unique and compelling Italian bodywork, makes the possibility to purchase PRX4705 an absolutely unique occasion, not to be missed.